Mega-cap technology stocks have surged to new highs recently. The momentum pushed the Nasdaq to records Friday as the market heads into a Thanksgiving-shortened week. The quick rebound came after investors took a temporary breather earlier this month.

The bulls have fought their way back in control—at least temporarily—in the face of 30-year high inflation in October. Wall Street is apparently still optimistic despite rising prices, supply chain setbacks, and difficulty filling millions of open jobs.

The backdrop for the positivity might focus on the fact that surging prices have not negatively impacted margins projections for the S&P 500 for 2022 or 2023. On top of that, fresh data out earlier this week showed U.S. retail sales jumped by a seasonally adjusted 1.7% in October vs. September. This is a great sign for the entire holiday shopping period.

Helping support the market moment, as is often the case, are strong earnings results and low rates. And interest rates are poised to remain at historically low levels for the foreseeable future even if the Fed was forced to start raising them tomorrow.

All that said, now might not be the best time to buy into mega-cap tech stocks. Instead, investors with long-term outlooks should consider blue-chip stocks trading well below their records…

Comcast is a global media and technology conglomerate that operates broadband and wireless internet businesses, as well as paid-TV and much more. CMCSA expanded its international reach through its Sky acquisition, and its streaming TV segment, driven by NBCUniversal’s Peacock is slowly helping counterbalance its fading cable TV unit that’s lost subscribers to cord-cutting.

Comcast’s movie studio and theme parks, which operate under the Universal brand, have bounced back recently amid the economic reopening. Meanwhile, its Xfinity Mobile cellphone business, which launched in 2017, has continued to gain steam. The segment added 285K customers last quarter for its best ever-showing, as part of a solid Q3 that saw Comcast beat our Q3 earnings and revenue estimates in late October.

Comcast has now topped our adjusted quarterly earnings estimates by an average of 21% in the trailing four quarters, including a 16% beat last period after its Q3 EPS jumped 34%.

Zacks estimates call for its FY21 earnings to climb 21% and then pop another 20% higher next year to $3.78 a share. Meanwhile, its revenue is projected to jump 12% in FY21 and another 7% higher to reach $123.44 billion in FY22, as it returns to solid growth after a slight covid-hit downturn.

Comcast, which lands a Zacks Rank #3 (Hold) right now, also bought back $1.5 billion worth of its shares last quarter and its 1.90% dividend yield nearly matches the 30-year U.S. Treasury and blows away the S&P 500’s 1.21%. Wall Street also remains largely bullish on Comcast, with 11 of the 15 brokerage recommendations Zacks has at “Strong Buys.”

CMCSA shares started to fall at the end of August, alongside the broader market. But the media and internet titan has failed to mount any real comeback just yet, down 16% from its records as of Friday at $51.91 a share. Comcast is trading well below its 50-day and 200-day moving averages.

Luckily, its Zacks consensus prices target of nearly $65 a share marks 25% upside to its current levels. And the recent downturn has it trading below its five-year median at 14.2X forward 12-month earnings. This also represents a 30% discount to its industry and its own year-long highs. And Comcast is closing in on oversold RSI levels (30 or under) at 38, while the S&P 500 is at overbought.

Disney fell well short of our Q4 earnings estimates on November 10, and Wall Street dumped the stock on slowing streaming growth. The recent post-earnings decline extends a longer downward trend that sets up a solid entry point for the entertainment powerhouse.

The firm added roughly 2.1 million new Disney+ subscribers to come in far below analysts estimate. The figure also marked its slowest growth since it launched in November of 2019. That “miss” is a tad misleading and it clouds how far the streaming service has come.

Disney+ boasts 118.1 million subscribers at the moment and executives reiterated on its earnings call the 230 to 260 million subscriber guidance by the end of FY24 for its namesake streaming platform. The new goal blows away its initial 60 to 90 million projections back in the fall of 2019.

Overall, its total streaming space hit 179 million across Disney+, ESPN+ and Hulu—NFLX closed Q3 with 214 million. The company is now one of the major players in a growth industry and its catalog and brands remain at the top of the food chain.

Disney’s Star Wars and Marvel movies dominated theaters before the pandemic and covid temporarily crushed its parks segment. The entrainment titan’s parks and resorts from Disney World in Orlando to Shanghai Disney Resort are now open. On top of that, it began releasing movies again in theaters, with comparatively strong showings given the circumstances. Plus, more and more people are poised to venture back to the theaters in 2022. 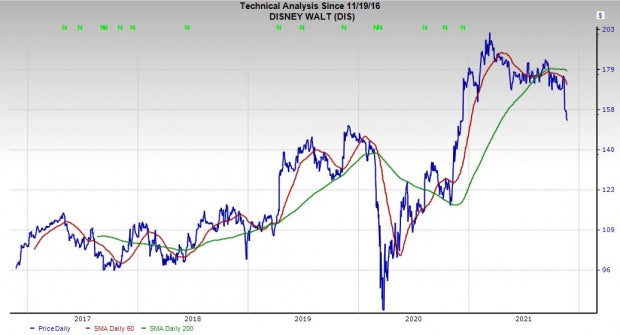 Disney’s revenue climbed 26% in the quarter and 3% on the year. Zacks estimates now call for its FY22 revenue to soar 25% to crush its pre-covid totals by $16 billion at $84.39 billion, with FY23 ready to climb 12% higher to over $94 billion. At the bottom end of the income statement, its adjusted earnings are expected to skyrocket 107% and 31%, respectively during this stretch.

Disney lands a Zacks Rank #3 (Hold) and its current-year EPS consensus slipped slightly following its release. Similar to its peer on our list today, Wall Street is still bullish on Disney for the long haul, with 11 of the 17 brokerage recommendations at “Strong Buys,” with two more “Buys” and nothing under a “Hold.”

Disney closed regular trading hours Friday 23% below its records at $154.00 a share. The pullback from its highs includes a roughly 13% decline since its earnings release. DIS is now trading around where it was last December and the post-earnings drop sent in well below oversold RSI levels (30 or under) at 25.

The decline completely recalibrated its valuation that had grown rather out of whack amid its huge pandemic climb, when its parks and theater units were crushed and it continued to spend on streaming. Disney now trades at a 60% discount to its year-long highs at 30.2X forward 12-month earnings. The stock does sit well off its 50-day and 200-day moving averages.

Yet, its current Zacks consensus price target of $201.95 share represents 31% upside potential to Friday’s close. All things considered, investors with long-term horizons might want to scoop up Disney stock now, even if it falls further because timing doesn’t matter as much if you plan to hold DIS for years.